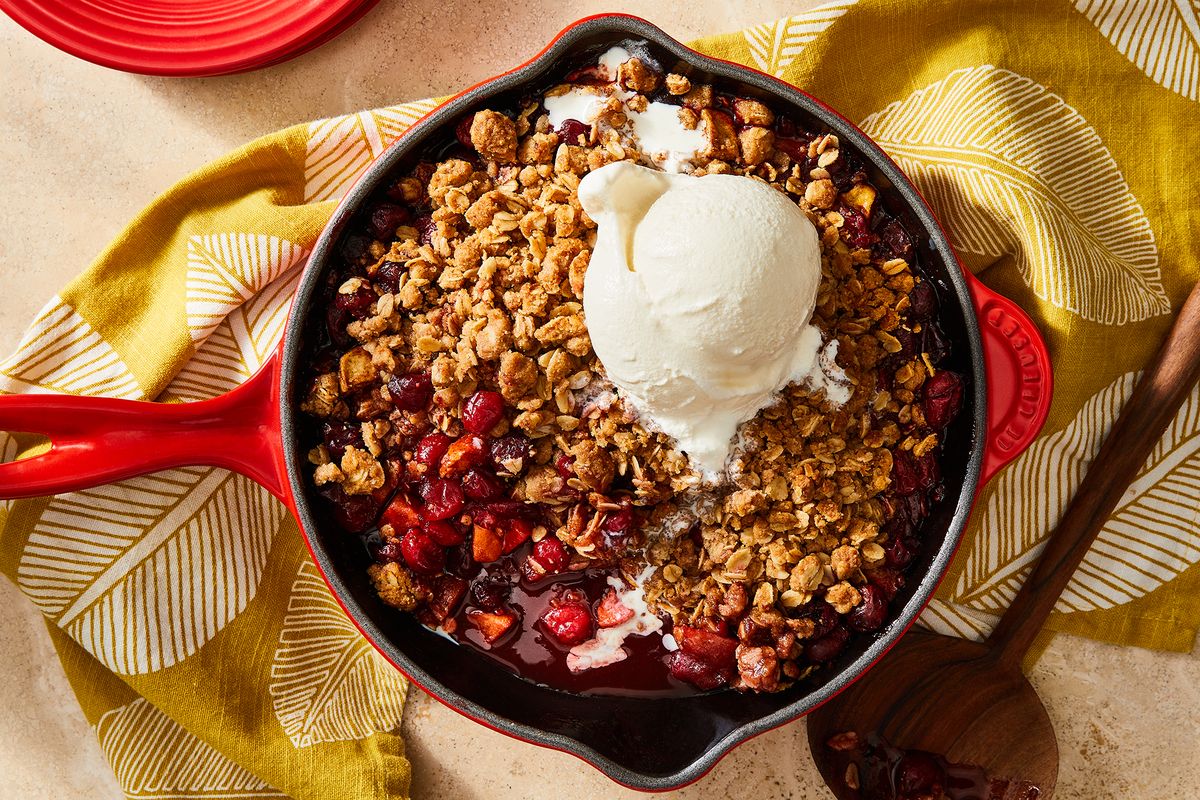 This fall, we got down to publish essentially the most scrumptious apple-cranberry crisp recipe of all time—one which was bursting with juicy fruit, evenly spiced, with the butteriest, crumbliest topping. We put our prime bakers on the duty.

Alongside the way in which, one thing wonderful occurred: We created two epic recipes. Jesse Szewczyk concocted a large-format crisp in a forged iron skillet, and Jessie Sheehan delivered particular person apple-cranberry crisps with a pecan crumble. A contented accident? We predict so. And in spite of everything, what are the vacations with out a little dinner desk debate? And so, the sweetest duel grew to become the sweetest duo.

Each recipes name for Granny Smith apples, frozen cranberries, cinnamon, and a streusel topping. They’re each scrumptious—in fact—and each come collectively in a single hour or much less. However the fraternal twins of the Thanksgiving dessert world have their very own identities, too. Jesse Szewczyk requires equal components of all-purpose flour and rolled oats in his recipe. “A beneficiant layer of oat streusel punctuated with cinnamon creates a crunchy topping that completely contrasts the tender fruit and provides a nutty chew,” he writes. Jessie Sheehan, then again, skips the oats and calls in pecans, and a calvary of spices together with ginger and nutmeg. “Typically guidelines are made to be damaged,” she writes, “so these explicit crisps don’t name for an oat-filled topping.”

As for easy methods to serve these apple-cranberry crisps, Jessie recommends heat with a drizzle of heavy cream, whereas Jesse prefers a scoop of vanilla ice cream. Uh, can I’ve each?

Need to know why Jessie Sheehan loves these crisps a lot? As a result of she does not must share! Plus, they’re the cutest miniature tackle a full-fledged traditional.

“Diced apples and contemporary cranberries mix with brown sugar, heat spices, and a splash of vanilla extract to create a flavorful base that brings out the most effective qualities of each fall fruits,” writes Jesse. Serve it in a cast-iron skillet for a extra rustic look or a ruffled pie dish for one thing slightly extra elegant.

Seize must-have components from the Food52 Pantry to make these crisps. Our all-purpose flour is made with natural warthog wheat, which is stone-milled in small batches by a fifth-generation household farm in Illinois. Similar goes for our rolled oats, which is why we love them and suppose you’ll too.

Tell us which crisp you wish to bake first!